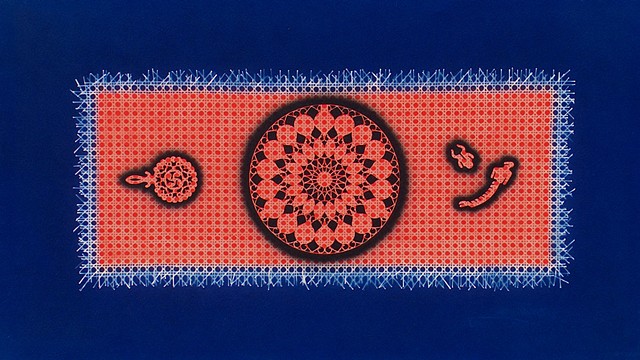 A truly arresting statement of feminine grace and power. Drawn as usual from the most mundane discarded objects, the artist forms an image of that ancient and continuously renewed female force: creation. The woven mat - a fundamental symbol of feminine industry - laid out with ceremonial care, frames the most primal image of life, beauty and female creation: the circle and the flower. The objects placed carefully around the central floral symbol suggest both sacred icons and the dressing table. This duality evokes our deepest feelings of maternal grandeur without moralizing or pretentiousness, but simply with a natural admiration and pleasure. This image speaks with the truly poetic manner, which is reminiscent of the definition set forward by the late Robert Graves.